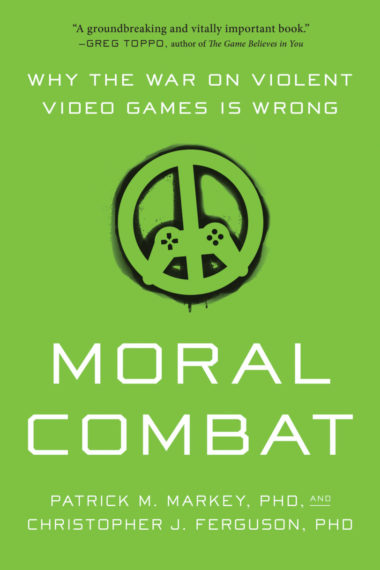 Video games get a bad rap. Seen by some as the hobby of the aimless, stereotypically associated with lazy (or, depending on the source or recent current event, violence-proned or addicted) adolescents, the many benefits that video games have to offer are grossly underreported.

Hence the plight of BenBella authors Patrick Markey and Christopher Ferguson to set the record straight in their new book, Moral Combat: Why the War on Violent Video Games is Wrong. Markey, a professor of psychology at Villanova, and Ferguson, an associate professor of psychology and department chair at Stetson University (both recognized video game authorities and self-identified enthusiasts), have spent significant time dedicated to researching video games—from their benefits to their disadvantages—and, after it all, have maintained their decidedly pro-video game stance.

In particular, one of the ways video games are unfairly demonized is in their addictiveness. Markey and Ferguson aim to offer their two cents (conveniently backed up by scientific research) on why this common opinion is a myth, in a recent op-ed written for the New York Times.

Markey and Ferguson’s piece in the Times is a fascinating and illuminating take on a topic not always given a fair shot in the media. And while the article covers just a piece of the video-game issue, their book, Moral Combat, is a comprehensive look at the gaming debate from all angles, all told with their signature snarky wit.