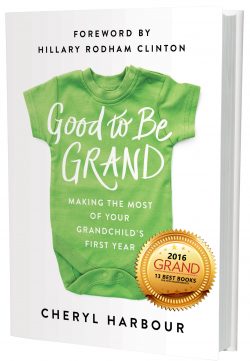 Cheryl Harbour’s book for new grandparents, Good to Be Grand: Making the Most of Your Grandchild’s First Year, was released this April and has been making waves ever since. Most recently, GRAND magazine named it the #1 Best Book for New Grandparents—an impressive accomplishment and testament to the importance of this book in the parenting and grandparenting communities, not to mention its overwhelmingly positive reception there.

In Good to Be Grand, Cheryl, a journalist and new grandmother herself, provides the ultimate roadmap for today’s grandparent, combining the latest information about infant care—from medical developments to equipment innovations to parenting practices—with honest, down-to-earth advice and anecdotes about grandparents’ special role. And Hillary Clinton, perhaps the most well-known new grandmother in the country and a longtime friend of Cheryl’s, has written the book’s foreword.

Her well-deserved praise for Good to Be Grand isn’t the only exciting development for Cheryl Harbour: she will also soon serve as the executive editor of GRAND magazine’s section for new grandparents, and her first contribution in the new role will appear in GRAND‘s July 2016 issue. She has become an invaluable resource for grandparents (and parents) everywhere, and we are thrilled to have published Good to Be Grand. Congratulations, Cheryl!