Revised and expanded China Study to release this December 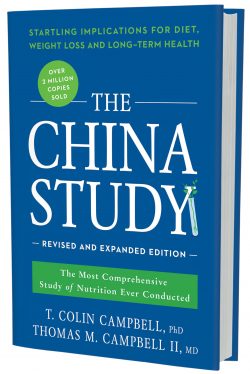 Very exciting news here at BenBella: we are coming out with a revised and expanded edition of The China Study (written by Dr. T. Colin Campbell and Dr. Thomas Campbell) on December 27th! In the more than ten years since its original release, The China Study has sold over 2 million copies worldwide and impacted countless more lives; its research has been a major influence in the rise (and scientific legitimacy) of the plant-based movement.

More than thirty years ago, nutrition researcher T. Colin Campbell and his team at Cornell, in partnership with teams in China and England, embarked upon the China Study, the most comprehensive study ever undertaken of the relationship between diet and the risk of developing disease. What they found, when combined with findings in Colin’s laboratory, opened their eyes to the dangers of a diet high in animal protein and the unparalleled health benefits of a whole foods, plant-based diet.

This expanded edition with feature lots of updated content, including:

We are absolutely thrilled about this upcoming revised and expanded edition of The China Study. We believe it’s an incredibly valuable resource and anticipate it will influence many more lives to come. You can read more about the book on its dedicated book page on the BenBella Vegan website.