Through the Eye of the Tiger

“Joe Thomas introduced me to Jim Peterik almost 20 years ago and we’ve been friends ever since.The first time I met him, we wrote a song together while sharing a spaghetti dinner at my favorite Italian Restaurant. I knew we had a hit…sure enough, that song ‘That’s Why God Make The Radio’ became the title of the Beach Boys’ highest debuting record (# 3) in over 40 years.”
—Brian Wilson

“Jim Peterik is such an extraordinary songwriter, musician and human being. I believe he was put here on this earth to inspire us all with his words and melodies and he’s done just that. Jim, you wrote a great book, great storytelling- such an adventure to read. Jimbo rides again!”
— Mindi Abair, Concord Records singer/saxophonist/songwriter and president of the LA chapter of NARAS

As the founding member of Survivor and co-writer of one of the most inspirational songs in rock history, Jim Peterik easily fits into the category of “rock star.” But a closer look at Peterik’s life and career reveal that he is anything but your typical rock star. Forgoing a life of meaningless sex and drugs, Peterik married his high school sweetheart and focused on the music, becoming one of the most prolific songwriters of his generation.

Here, for the first time, Peterik shares the stories behind his iconic songs—from touring with Led Zeppelin and Janis Joplin on the heels of the Ides of March number one classic “Vehicle” to his Grammy-winning, triple platinum “Eye of the Tiger” with Survivor and beyond. He explores the often torturous power struggles within the band contrasted by the giddy highs that accompany a trail of worldwide hits. Peterik has also co-written songs with some of the most famous bands and artists in rock-and-roll, including 38 Special (Rockin’ Into the Night, Caught Up In You, Hold On Loosely), Sammy Hagar (Heavy Metal), Brian Wilson, The Doobie Brothers, REO Speedwagon, Cheap Trick, the platinum comeback of The Beach Boys (That’s Why God Made the Radio), and many more.

Find Through the Eye of the Tiger at other Vendors 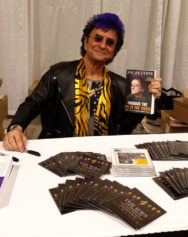 What do Survivor, The Ides Of March, .38 Special, Sammy Hagar, and The Beach Boys have in common? The uncommon songwriting, vocal, and production talents of Jim Peterik.

In high school, Peterik put together his first band, The Ides Of March, whose single “Vehicle” hit #2 on the Billboard chart. Just out of high school, the band did shows with Led Zeppelin, The Grateful Dead, Janis Joplin, and many more.

In 1977, Jim founded one of the premier rock bands of the ‘80s: Survivor. After two critically acclaimed albums, he received a call from Sylvester Stallone to write a song for an upcoming movie. With worldwide sales now reaching 30 million, the Peterik/Sullivan-penned anthem “Eye Of The Tiger” became the title song of Rocky III and one of the most popular motivational anthems of all time.

Peterik garnered 18 Top 10 hits, including “Hold On Loosely,” “Caught Up In You,” “Rocking Into The Night,” and “Fantasy Girl.” With Peterik’s Songwriting for Dummies now a bestseller, he is traveling the world doing songwriting seminars. Ides Of March recently celebrated 50 years of making music together.