Plant-Based on a Budget – Discount Ebook

“It’s an unfortunate misconception that plant-based eating requires extravagant spending—nothing could be further from the truth, as Plant-Based on a Budget so expertly demonstrates. This book is an excellent resource for anyone who wants to make the healthiest choices possible while also spending wisely.”
—T. Colin Campbell, PhD​​, coauthor of international bestseller The China Study and New York Times bestseller Whole

“When I became a vegan in 1987, I was making $2,500 a year and spending $10 a week on food. And amazingly, I ate well! This book shows how easy it is to eat well and be a vegan without spending a ton of money.”—Moby, singer and songwriter

Between low-paying jobs, car troubles, student loans, vet bills, and trying to pay down credit card debt, Toni Okamoto spent most of her early adult life living paycheck to paycheck. So when she became a vegan at age 20, she worried: How would she be able to afford that kind of lifestyle change?

Then she discovered how to be plant-based on a budget.

Through her popular website, Toni has taught hundreds of thousands of people how to eat a plant-strong diet while saving money in the process. With Plant-Based on a Budget, going vegan is not only an attainable goal, but the best choice for your health, the planet—and your wallet.

Toni’s guidance doesn’t just help you save money—it helps you save time, too. Every recipe in this book can be ready in around 30 minutes or less.

Through her imaginative and incredibly customizable recipes, Toni empowers readers to make their own substitutions based on the ingredients they have on hand, reducing food waste in the process.

Inside discover 100 of Toni’s “frugal but delicious” recipes, including:

With a foreword by Michael Greger, MD, Plant-Based on a Budget gives you everything you need to make plant-based eating easy, accessible, and most of all, affordable.

Featured in the groundbreaking documentary What the Health 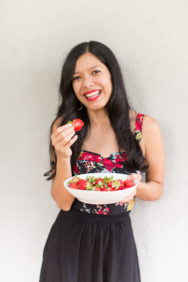 Toni Okamoto is the founder of Plant-Based on a Budget, the popular website and meal plan that shows you how to save dough by eating veggies. She’s also the author of the Plant-Based on a Budget Cookbook, and the co-host of The Plant-Powered People Podcast. Okamoto’s work has been profiled by NPR, NBC News, Parade Magazine, and she’s a regular presence on local and national morning shows across the country, where she teaches viewers how to break their meat habit without breaking their budget. She was also featured in the popular documentary What the Health. When she’s not cooking up a plant-based storm, she’s spending time with her husband and their rescued dog in Sacramento, CA.