How to Be a Man (Whatever That Means)

Internet humorist James Breakwell, author of Only Dead on the Inside and Bare Minimum Parenting, gets more personal in How to Be a Man (Whatever that Means), a collection essays exploring his often-confusing relationship with masculinity through memories and witty observations.

There’s no wrong way to be a woman. There are countless wrong ways to be a man.

James Breakwell should know. He’s tried just about all of them. Journalism. Pig ownership. Felony lawn gnome theft. Whatever masculinity is supposed to be, this can’t be it. But can you really fail at something no one can quite define? Apparently.

Now, in a series of funny, sharply observed, and occasionally poignant essays, everyone’s favorite internet-famous father of four daughters lays down a lifetime of lessons in what it means to be a man. You’ll laugh. You’ll cry. You’ll wonder what really happened to those creepy lawn gnomes on that deserted country road. (Spoiler alert: They’re right behind you.)

If you ever wanted to know how to fail at altruism, dodge the priesthood, and stumble your way into unexpected wisdom, this book is for you.

How to Be a Man (Whatever that Means) presents a vision of manhood that looks very different from what you’ll see on TV. And that’s a good thing. Probably.

James Breakwell is a professional comedy writer and amateur father of four girls, ages eight and under. He is best known for his family humor Twitter account @XplodingUnicorn, which boasts more than a million followers. The account went viral in April 2016 and transformed James from a niche comedy writer into one of the most popular dads on social media. James has published three books, with several more planned for release in coming years. Only Dead on the Inside: A Parent’s Guide to Surviving the Zombie Apocalypse offers useful advice for how to raise happy, healthy children in a world overrun by the undead. Bare Minimum Parenting: The Ultimate Guide to Not Quite Ruining Your Child teaches regular moms and dads to best overachieving parents by doing less. How to Save Your Child from Ostrich Attacks, Accidental Time Travel, and Anything Else that Might Happen on an Average Tuesday is a guide for dealing with literally everything else. And most recently, Prance Like Nobody’s Watching is a guided journal specifically for kids. 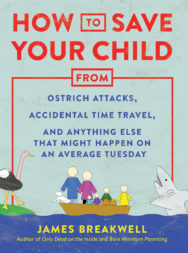 How to Save Your Child from Ostrich Attacks, Accidental Time Travel, and Anything Else that Might Happen on an Average Tuesday 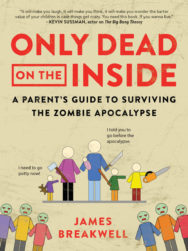 Only Dead on the Inside 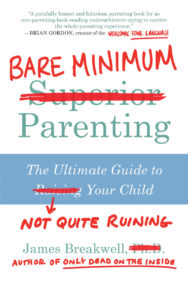