By Brant Secunda and Mark Allen

Let’s face it: fitness goes far beyond how long it takes to walk or run a mile. When you’re stressed out, emotionally drained, overworked, overweight and underappreciative of your physical body, you can’t get much of anything accomplished—at work, at home, on the race track, wherever and in whatever capacity. Put simply, when you’re spiritually unfit, life is a greater challenge. That mythical “balance” you’ve always dreamed of achieving is just that — a myth. But not anymore.

Mark Allen was one of the top triathletes in the world but struggled to get past the barriers preventing him from winning the grueling Ironman World Championship triathlon in Kona, Hawaii.

Then he began studying with Brant Secunda, healer and teacher in the Huichol Indian tradition of Mexico. Brant is the only Westerner to have completed a 12-year apprenticeship with Don José Matsuwa, the revered Huichol Indian shaman. Brant taught Mark the spiritual and healing exercises that allowed him to integrate his physical and psychological fitness.

Mark went on to win a never-before-achieved six Ironman triathlons in a row and was called the “World’s Fittest Man” by Outside magazine.

Now, Brant and Mark have integrated their wisdom into one book, providing practical tools you can adapt to your lifestyle and achieve results you never thought possible. 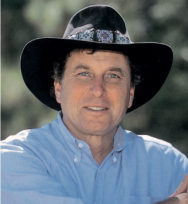 Brant Secunda is a world-renowned shaman, healer and teacher in the Huichol Indian tradition of Mexico. He is the only Westerner to have completed a 12-year apprenticeship with Don José Matsuwa, the revered Huichol Indian shaman. Since 1979, Brant has been the director of the Dance of the Deer Foundation Center for Shamanic Studies in Santa Cruz, Calif. Brant is a founding member of the American Herbalist Guild and the Peace University of Berlin, with President Jimmy Carter and Bishop Desmond Tutu, and is co-founder of the Humanistic Medicine Conference in Germany. Brant’s work has been documented on television, radio and in articles and books throughout the USA, Europe and Japan. Brant Secunda has medically documented cases of healing cancer, hepatitis, infertility, aneurysms and many others. He has many well-known patients, including movie actor Steven Segal. Members of the international medical, religious and educational communities, including the World Health Organization, have recognized Brant’s commitment—as well as his knowledge—by inviting him to be a featured speaker, workshop leader and participant at numerous conferences worldwide.