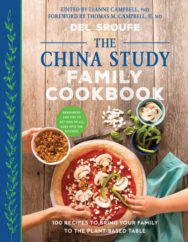 All Online Press for The China Study Family Cookbook

You’ve read The China Study and committed to a plant-based diet, convinced it’s the best choice for your own health and well-being, not to mention the planet’s. But now you need to successfully navigate the transition. And convince your family to do the same . . . or at least eat a few more veggies. The China Study Family Cookbook: 100 Recipes and Resources to Bring Your Family to the Plant-Based Table is the family-friendly cookbook and guide you’ve been waiting for.

Edited by The China Study Cookbook author LeAnne Campbell, and with a foreword from China Study co-author and The Campbell Plan author Thomas M. Campbell II, MD, The China Study Family Cookbook is the ultimate guide to helping your family transition to the joys and benefits of plant-based eating.

PBNSG – author selected as Chef of the Month for June; recipes featured

Responsible Eating and Living — recipe excerpt on May 29, 2017