Tyler Stanton and Tripp Crosby are a sketch comedy duo most known for their hilarious and viral YouTube videos. They have been writing, directing, and performing their own comedy material since 2006 and have since amassed over 23 million video views and over 65,000 subscribers.

Currently they are working full time as comedy writers and performers in Atlanta. 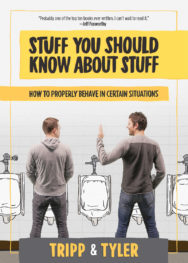 Stuff You Should Know About Stuff