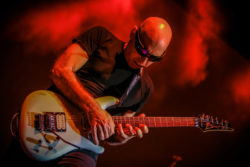 For three decades, Joe Satriani, the biggest selling rock instrumental guitarist in the Soundscan era, has traveled the world, playing to sold-out crowds as both a headliner and as founder of the all-star “G3” guitar extravaganza. His studio and live recordings have sold more than 10 million copies worldwide, and of his many solo albums, two have gone platinum and four others went gold, with 15 Grammy nominations between them. His side project, Chickenfoot, featuring former Van Halen front man Sammy Hagar, former bassist Michael Anthony, and Red Hot Chili Peppers’ drummer Chad Smith saw their debut album certified gold. In 1988, Mick Jagger invited Joe to perform as lead guitarist on his first solo tour, and in 1994 Joe toured with Deep Purple as their lead guitarist. Music sensation Nicki Minaj sampled the classic Satriani song, “Always With Me Always With You” in her song, “Right Through Me” from her 2010 multi-platinum debut album. In 2011, Satriani recreated his National Anthem performance in the film Moneyball. In May of 2013, Satriani celebrated the release of his 14th studio album, Unstoppable Momentum. 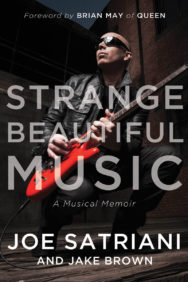