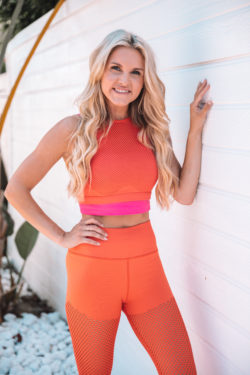 Originally from the UK, Rebecca Louise came to the USA at 23 on a whim to get her commercial pilot’s license, which she completed out of the Long Beach, CA, airport. The small-town girl from Eastbourne, UK, had grown up watching MTV’s The Hills, and after landing at LAX, she knew that this is where she was meant to be. Rebecca played field hockey for the South of England, was in many sports teams at school, and is a trained dancer. After going through anorexia at 17 and being bullied throughout school, she never let anything stop her from following her dreams. Although Rebecca loved flying, it was not her ultimate passion. After obtaining her work visa to come to the States, she was cast on a fitness Youtube channel. This is where Rebecca’s love for fitness, helping people, and hosting came alive. Since then, her YouTube views have surpassed over 400 million, and Rebecca went on to create her fitness and nutrition App, BURN.

Rebecca lives in Huntington Beach with her two dogs, Alphie and Pennie. She has travelled to more than 20 countries to host fit camps to meet her fans and help them feel the BURN! Her podcast, It Takes Grit, launched in January 2019 and is already in the top charts in some countries. The purpose of the podcast is to inspire and give YOU the plan to take ACTION! Rebecca’s programs have been featured in/on Entrepreneur, Vogue, Allure, Cosmopolitan, Shape, KTLA, FOX, Oxygen, Closer, Well+Good, and Goop.