Lilo and Gerard Leeds met in a ski lodge in the Adirondack Mountains in 1950, were married in 1951 and now, more than 55 years later, have a family of five children and 13 grandchildren. Lilo and Gerard hold degrees in math and science, respectively, received their master’s degrees together in liberal arts, and have, between them, seven honorary doctorates. They live in Long Island, N.Y.

Books by Lilo and Gerard Leeds 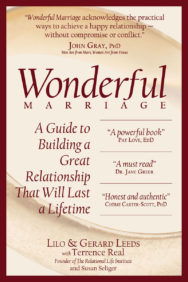