Paul Laudicina is the founder of the Global Business Policy Council, a specialized strategic advisory services unit within Kearney, to help senior leaders in business, government, and civil society rise to the challenge of navigating in a transformed world. A quarter-century later, the Council is one of the world’s best-known and most highly-regarded private-sector think tanks.

A graduate of the University of Chicago in political science and government, he is the Vice Chancellor of the International Academy of Management and a member of the Council on Foreign Relations. Paul is also a CEO Coach working with Korn Ferry, the world’s largest executive search, human resources, and leadership development firm, through which he actively mentors a rising generation of CEOs.

Paul has also remained politically active throughout his career. As a close advisor to Joe Biden and the Biden campaign, he was “in the trenches” from the snowy beginning in Iowa as he will be through the 2020 Democratic National Convention as a member of the Platform Committee. When not on an airplane, he divides his time between Scottsdale, Arizona, and Santa Fe, New Mexico; his Kearney office in the Washington, DC area; and client sites and podiums across five continents.

Connect with Paul A.

Books by Paul A. Laudicina 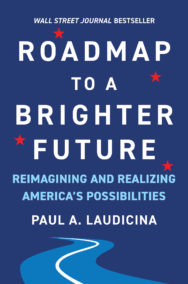 Roadmap to a Brighter Future