Dr. James R. Kass has been working in the field of human spaceflight for more than 30 years. He was an investigator on the first Spacelab mission in the early 80s in the field of neurophysiology. In the decade following, he gained industrial experience at several aerospace companies in Germany, before joining the European Space Agency at its research and technology centre, ESTEC, in the Netherlands.

Dr. Kass has trained astronauts and worked on the ground operations teams for several Spacelab /Space Shuttle and MIR missions (including the tragic STS-107), with crews from Russia, USA, Middle and Far East, and several European countries. He has also worked with cosmonauts of the former Salyut space station and astronauts of the first US space station, Skylab. He has participated as scientist and reviewer in several isolation experiments investigating psychology of long-duration isolation, as one will certainly encounter on Mars. 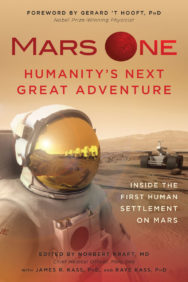 Mars One: Humanity’s Next Great Adventure