Aaron Johnston is a New York Times bestselling author. He and Orson Scott Card wrote Earth Unaware, which is the first of a series of prequel novels to Ender’s Game. The second novel, Earth Afire, will be released by TOR in summer 2013. Aaron also adapted Orson Scott Card’s Ender in Exile and Speaker for the Dead for Marvel Comics. Other comics credits within the Ender universe include League War, Mazer in Prison, and Formic Wars. He and Orson Scott Card are also the co-authors of the novel Invasive Procedures. Follow him at aaronwjohnston.com or on Twitter @AaronWJohnston. 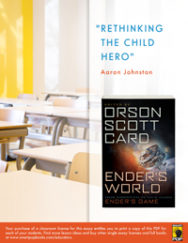