For over two decades, Tim & Julie Harris have been leaders in the real estate industry, first as top-producing agents and now as the nation’s most sought after real estate coaches. In their twenties, during their very first full year as Realtors®, Tim & Julie earned real estate industry acclaim by selling more than one hundred homes. Thereafter, Tim and Julie Harris have participated in thousands of home sales. In 1999, they authored their first book, which sold out in the first 27 days. More recently, Tim and Julie have become #1 international bestselling authors of Harris Rules. The National Association of Realtors® featured Tim & Julie in articles about their real estate sales success, and in 1998 they were recruited to become Howard Brinton Stars, which introduced them to real estate coaching and training. Tim and Julie started coaching agents in 1998. From 2002-2007, they worked with other coaching organizations as coaches and executives. Tim and Julie Harris are honored to have coached many of the nation’s top producing agents. Inman News named Tim and Julie Harris as the “best coaches in the industry.” 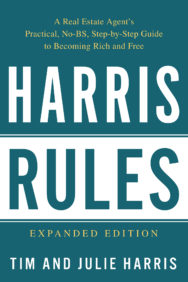