Courtney Emerson is the co-founder and former chief operating officer of All In Together (AIT), a non-partisan nonprofit that encourages, educates, and empowers voting-age American women to fully participate in America’s civic and political life. As COO of AIT, she led partnerships, training and community-building programs, and designed the civic education curriculum, which has reached tens of thousands of women across the country. Courtney has spoken at conferences and companies around the country, including Facebook, The Wing, Lyft, Oxford University’s Power Shift Summit, the Democratic National Committee’s Women’s Leadership Forum, the YWCA of NYC, and many others. She has written for Refinery29, OZY, HuffPost, The Hill, and New York Daily News. Formerly a vice president at the Center for Talent Innovation, she advised Fortune 500 and global companies on the design and delivery of diversity and inclusion initiatives. Courtney graduated magna cum laude from Princeton University with a degree in politics. 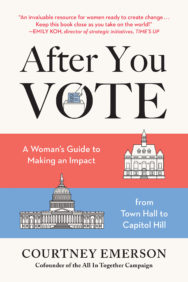