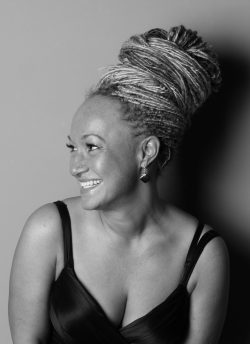 Rachel Doležal holds an MFA from Howard University. Her scholarly research focus is the intersection of race, gender, and class in the contemporary Black diaspora, with a specific emphasis on Black women in visual culture. Her life work is underscored by racial and social justice activism, and she is a licensed Intercultural Competency & Diversity Trainer. Dolezal has guest lectured at Spokane Community College, University of Idaho, Gonzaga University, and Washington State University, and was the Advisor for the Black Student Unions at North Idaho College and Eastern Washington University.

Doležal began her activism in Mississippi, where she advocated for equal rights and partnered with community developers, tutoring grade-school children in Black history and art, and pioneering African American history courses at a predominantly white university. She is the former Director of Education at the Human Rights Education Institute in Idaho and served as a consultant for human rights education and inclusivity in regional public schools. She recently led the Office of Police Ombudsman Commission to promote police accountability and justice in law enforcement in Spokane, WA and was the President of the Spokane Chapter of the NAACP. She is the mother of three sons.