Mike Diamond is an author, television personality, director, life coach, and interventionist. He is best known for his work on the hit TV shows NY Ink and Bondi Ink Tattoo Crew, which is currently nominated for a Logie Award for Best Reality Series. After winning a green card in 1997, Mike moved from Australia to the US where he found work on various television projects. He eventually found himself properly introduced to the world of tattooing when he made an appearence on Miami Ink. To the outside world, Mike looked like he was living the dream but, on the inside, Mike was spiritually bankrupt and miserable. He realized that if he didn’t turn his life around, he was going to die. April 16, 2006 was the day Mike Diamond got sober. Since then, Mike has literally helped hundreds of people on the road to recovery. He is on beck and call to all his clients and friends, helping them through their life problems and battles with addiction. 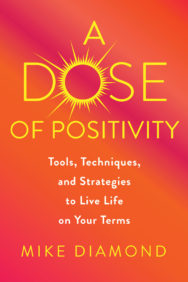 A Dose of Positivity