Bella DePaulo (PhD, Harvard) is the author of Behind the Door of Deceit: Understanding the Biggest Liars in Our Lives and Singled Out: How Singles Are Stereotyped, Stigmatized, and Ignored, and Still Live Happily Ever After. She has published more than 100 scholarly articles. DePaulo’s work on deception has been described in The New York Times, The Washington Post, the Wall Street Journal, Time magazine, the New Yorker, and many other publications. Dr. DePaulo has appeared as an expert on deception on ABC, NBC, CBS, CNN, PBS, the BBC, and other television outlets. She has also lectured nationally and internationally. 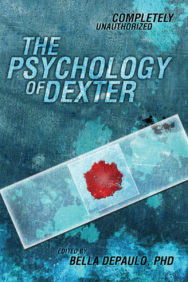 The Psychology of Dexter

Deception: It's What Dexter Does Best (Well, Second Best) from The Psychology of Dexter