Ned Vizzini is the author of It’s Kind of a Funny Story, Be More Chill, and Teen Angst? Naaah…. He has written for The New York Times, The Daily Beast, and MTV’s Teen Wolf. His work has been translated into seven languages. He is the co-author, with Chris Columbus, of the forthcoming fantasy-adventure series House of Secrets. He has contributed to Smart Pop anthologies about The Hunger Games, The Chronicles of Narnia, and The Walking Dead. He has spoken at over two hundred universities, libraries, and schools around the world about writing and mental health. He received an award from UCLA in 2011 for Excellence in Public Advocacy Through the Arts. Ned lives in Los Angeles with his wife Sabra Embury and their son. His next novel, The Other Normals, will be published by HarperCollins on September 25, 2012. 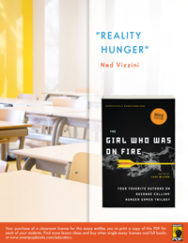 Reality Hunger from The Girl Who Was on Fire