Robert Tuchman is the founder and president of New York-based TSE Sports & Entertainment, a global leader in sports and entertainment promotion. He is a contributing writer for ESPN.com and has been featured in publications including the Wall Street Journal, USA Today, the New York Times, BusinessWeek, Entrepreneur and Southwest Airlines Spirit magazine. A frequent guest on “Your World with Neil Cavuto,” Tuchman has appeared on CNN, BET and on the “CBS Morning News.” He resides with his wife Amy in the Upper West Side in Manhattan. 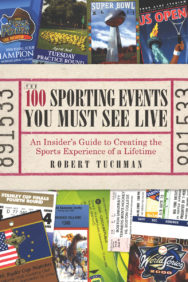 The 100 Sporting Events You Must See Live