Matthew Newell has dedicated his life to helping children with special needs and brain injuries. As founder of The Family Hope Center in Greater Philadelphia, he has assembled a team of doctors and therapists and developed neurologically based therapy programs for over thousands of families, guiding parents through the process of healing their children. His rate of success with these children is unparalleled in the field. Over the past 35 years, Matthew has lectured and initiated child development programs internationally, working with parents and specialists in more than two dozen countries. He is the recipient of many international awards, including The Founders Award from The International Academy for Child Brain Development, which is the highest honor given by the academy.

A native of England, Carol Newell has dedicated her life to helping children, particularly those with special needs. She began her career as a Certified Nursery Nurse in the UK, where she worked with healthy children as well as those with varying degrees of health problems. After becoming fascinated by the advancements made with brain-injured children by the Institutes for the Achievement of Human Potential, Carol contacted the IAHP about a position. She was accepted into a four-year program that brought her to the United States, where she later became certified in Child Brain Development. Carol ran the Early Development Program for IAHP for 10 years. She has worked in a clinical setting with special needs children for 35 years.

Books by Carol and Matthew Newell 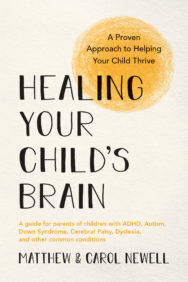