Dr. Neil Mulholland was born and raised in Glasgow, Scotland. He is presently a senior psychologist in child and family psychiatry at the Glenrose Rehabilitation Hospital in Edmonton, Canada, and consults to several health teams in the region. He also runs a small private practice for kids and adults, where he often uses Harry Potter as a therapeutic tool. In 1979, after spending ten years in the deserts of Arizona and New Mexico, Dr. Neil graduated from Arizona State University. He then returned to Vancouver, Canada, and spent 20 years there before moving to the prairies of Alberta. According to the online quizzes, he’s a bit of a Mr. Weasley. 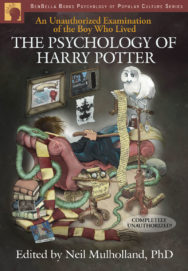 The Psychology of Harry Potter