Chad Mendes was born and raised in central California, where wrestling, hunting, and fishing were a huge part of his life growing up. He was recruited to wrestle at Cal Poly SLO, where his small town palette was introduced to a whole new world of cuisines. There he became a two-time NCAA D-1 All-American and runner-up during his senior year. After graduating, he moved up to Sacramento and began his UFC career. Within his 10 years of fighting, he fought for the UFC world title three times, competing against opponents such as Conor Mcgregor and Jose Aldo. With hunting being such a huge part of his life still, he teamed up with Chad Belding of The Fowl Life to bring readers The Provider Cookbook, featuring their favorite recipes. 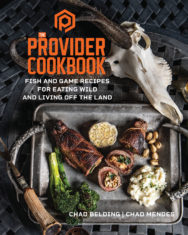