Jordan Hoffman is an entertainment journalist whose work can be read in Vanity Fair, The Guardian, The New York Times, New York Daily News, Los Angeles Times, and New York Magazine. He penned 100 “One Trek Mind” columns for startrek.com, hosted “Engage: The Official Star Trek Podcast” for two years, and has moderated at Star Trek conventions across the world. 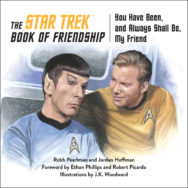 The Star Trek Book of Friendship