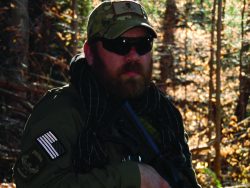 Bill Fulton is an Army veteran with extensive and ongoing training in anti-terrorism, weapons and explosives, hazardous materials, nuclear, biological, and chemical weapons, WMDs, public health and safety, emergency management, surveillance and operations, law enforcement, and military justice. He is also an adrenaline junkie who owned and operated a fugitive recovery service in Anchorage, Alaska, that took more than 400 criminals off the streets. During his career, he has worked with the Army Criminal Investigation Division, the FBI, and other governmental agencies, while working undercover to apprehend domestic terrorists.

He currently works as an undercover operative with the FBI, and other Federal and State agencies. Bill lives in an undisclosed location with his wife, two children, and assorted pets. When he is not assisting governmental agencies in combatting domestic terrorism, he enjoys organic gardening, permaculture, reading, being a dad, and fine wine.