John Catsimatidis was born on the Greek Island of Nisyros in 1948 and 6 months later his parents emigrated to New York City in search of a better life. During his senior year at NYU, with just 8 credits remaining, John dropped out to work in the grocery business full-time. By his 25th birthday he was already a success with 10 Red Apple Supermarkets scattered along Broadway on Manhattan’s Upper Westside.

Now, four decades later the Red Apple Group has evolved into a diversified corporation that has holdings in the energy, aviation, retail, and real estate sectors and over 8K employees, with approximately 2K located in New York City.

John is a firm believer in giving back to the community and has been a strong supporter of the Police Athletic League for nearly 30 years. He serves on the Board of Columbia Presbyterian Hospital, the Hellenic Times Scholarship Fund, and over the years served in a variety of volunteer positions in the Greek Orthodox Church. 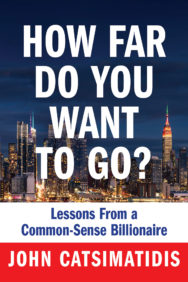 How Far Do You Want to Go