Turn This Car Around

Our nation has become one full of apologies and Politically Correct (PC) statements. It’s time for the true right to make a political comeback. Former Governor Robert Ehrlich has written the roadmap—Turn This Car Around. He urges the American public to make a real change and address (with him) the issues of union strangleholds, Obamacare, a failed stimulus package, soaring energy costs and high unemployment, the race-card, the Living Wage war, bipartisanship and other heated topics. Ehrlich notes thatour education system is not meeting the needs of our children, race relations have been derailed and the family structure is crumbling. This needs to change. There is too much at stake for the country and our culture.

Turn This Car Around is a call to action, and a blunt collection of dispatches from America’s culture wars, retold by a former state legislator, congressman, and governor who fought on the front lines. Bob Ehrlich recounts the contentious battles he waged in the widely recognized liberal state of Maryland, and provides insightful suggestions to help resolve many of the issues in America. 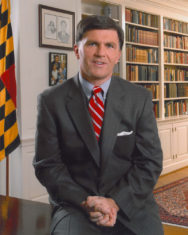 The Honorable Robert L. Ehrlich, Jr., is senior counsel in the Government Advocacy and Public Policy practice group at King & Spalding. Having served as Governor, U.S. Congressman, state legislator, and civil litigator, he counsels clients on an array of government matters, with particular expertise in health care, finance and economic development. As Maryland’s first Republican governor in 36 years, Governor Ehrlich launched construction on 123 statewide transportation projects in four years and managed the most successful military base realignment and closure strategy in the nation. He toughened penalties for sex offenders, drunk driving, and witness intimidation and established Maryland’s first Office of Homeland Security. Prior to serving as governor, Congressman Ehrlich won four terms in the U.S. House of Representatives.

In Congress, he served as a member of the House Majority Whip team, wherein he helped pass comprehensive tax relief, greater access to health care, federal education reform, and the first balanced budget in a generation.

He also served in the Maryland House of Delegates from 1986 to 1994, representing Baltimore County.

Prior to running for public office, Ehrlich was associated with the Baltimore law firm of Ober, Kaler, Grimes and Shriver, where he practiced civil litigation for eleven years. He was a founding Member and Partner at the law firm of Womble Carlyle Sandridge & Rice PLLC in Baltimore.

He earned his bachelor’s degree in political science from Princeton University in 1979, where he captained the freshman and varsity football teams, and his Juris Doctorate from Wake Forest University in 1982.

Governor Ehrlich is married to Kendel (Sibeski) and they live in Annapolis, Maryland with sons Drew and Josh.